Every Step Is One Step Closer to Success 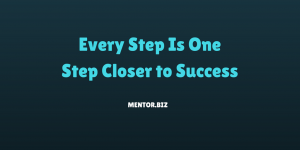 When people say they have failed what they really should be saying to themselves I have failed with that attempt, so it’s another attempt that’s all, the more attempts you go for the closer you will get to success. Take Thomas Edison who invented the light bulb, most people will tell you he failed 10,000 times before he was successful but stated no “I found 10,000 ways not to do it”. We can look for excuses to quit or look for ways to make it happen.